Oppo introduced the F21 Pro series a few days ago, including 4G and 5G models. Both smartphones come in Cosmic Black shade, but you also have the option to buy the 4G version in Sunset Orange color and the 5G variant in Rainbow Spectrum color.

We got a chance to spend some time with the Sunset Orange version of the Oppo F21 Pro 4G, sold as Reno7 in some markets, so here are our first impressions.

The Oppo F21 Pro comes in a blue-colored box, including a protective case, a SIM ejector tool, USB-C cable, 33W adapter, and the usual paperwork. 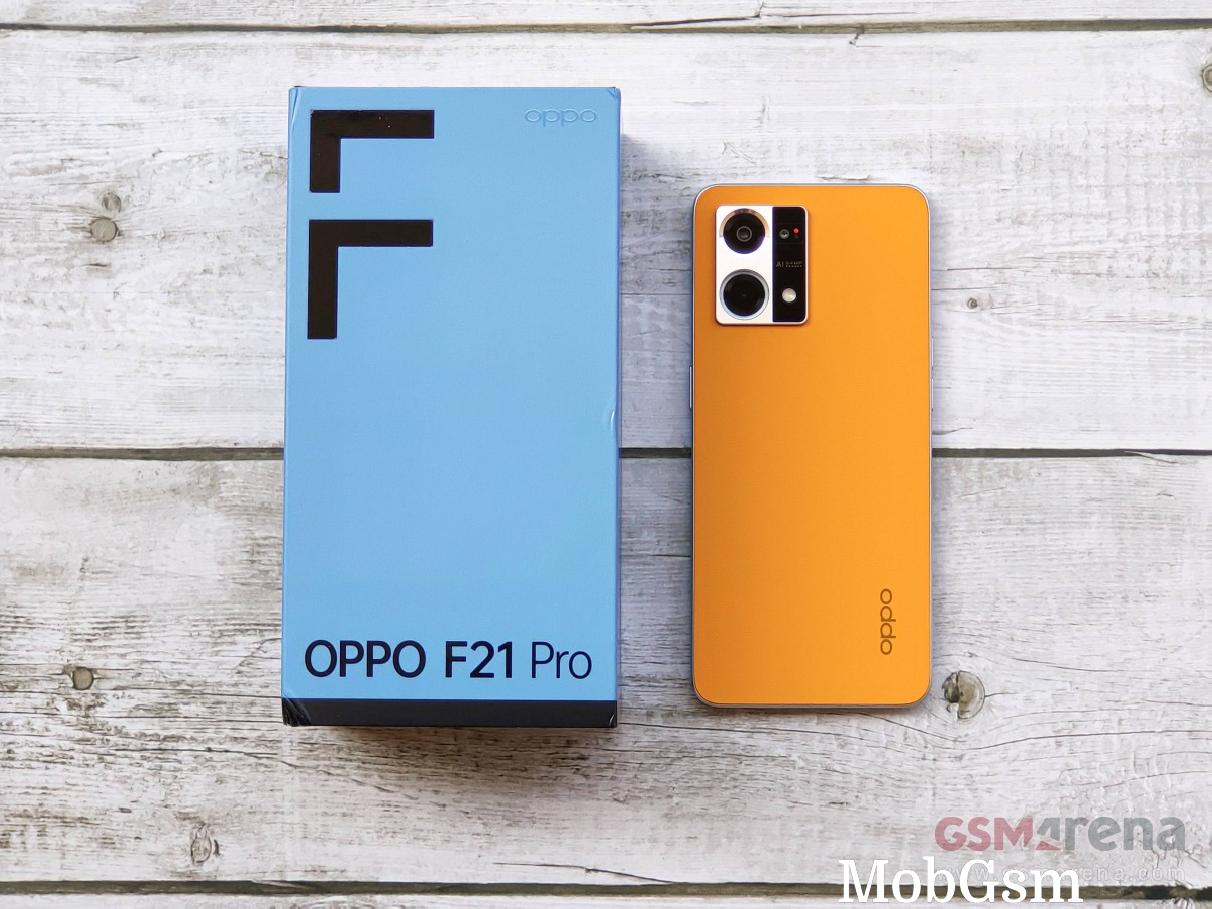 The Oppo F21 Pro packs a 6.4" FullHD+ AMOLED screen with a 90Hz refresh rate, 180Hz touch sampling rate, and 600 nits peak brightness. It's protected by Gorilla Glass 5 and has a fingerprint reader underneath, which we found to be fast and accurate in the short time we spent with the smartphone.

The panel also has a punch hole in the upper-left corner for the selfie camera. It uses a 32MP Sony IMX709 RGBW sensor which is one of the biggest highlights of the smartphone and is the same sensor we have on the more expensive Reno7 Pro 5G. 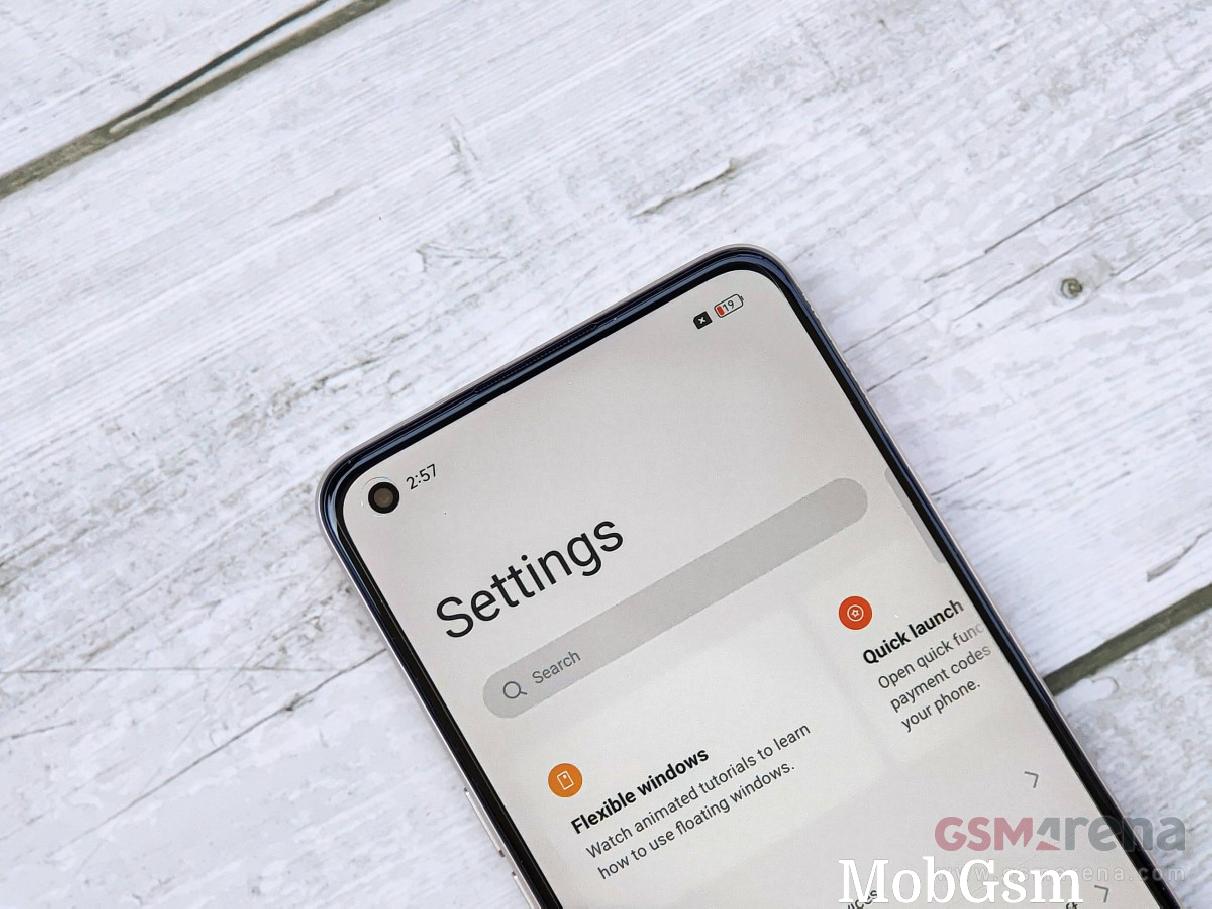 The F21 Pro has Widevine L1 certification, meaning it can stream 1080p videos on OTT apps, including Amazon Prime Video. The smartphone also supports HDR10 and HLG codecs, but it couldn't play HDR videos on YouTube. Besides, Oppo's implementation of screen refresh rate on the F21 Pro is quite weird.

The smartphone has two refresh rate options under the Settings > Screen refresh rate menu - High and Standard. The former bumps up the refresh rate to 90Hz when you interact with the screen and switches back to 60Hz after a few seconds of inactivity (except in the YouTube app which remains at 90Hz throughout). This should help save battery to some extent when you are reading something or watching a video. 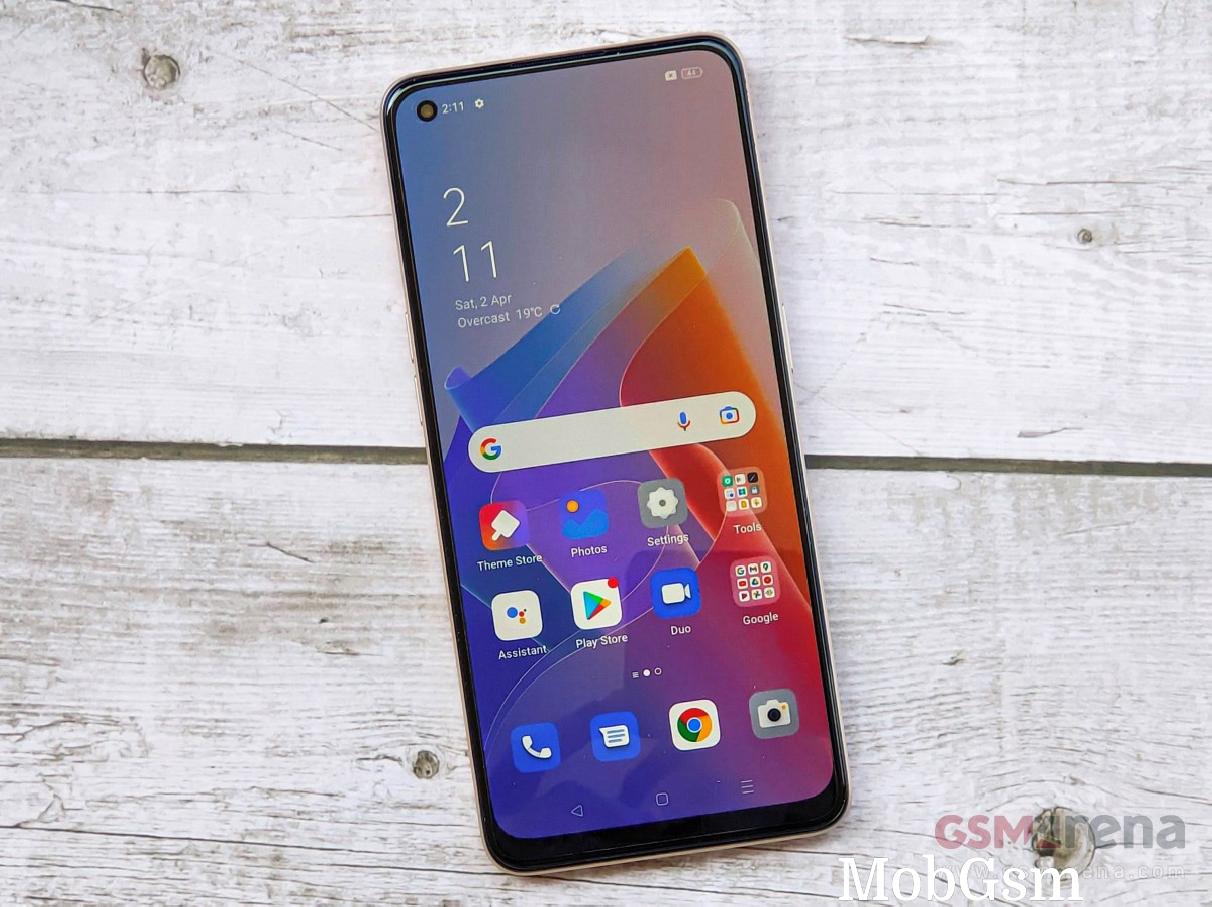 However, the Standard mode, which is supposed to stick to 60Hz in all scenarios, also increases the screen refresh rate to 90Hz and works in exactly the same way as the High mode. We reached out to Oppo for more clarity but haven't received a response yet. Hopefully, this will be fixed with a future update.

It's also worth mentioning that none of our standard set of test games, which support high refresh rate gameplay, ran at 90 FPS on the Oppo F21 Pro. That's hardly a surprise since the more expensive Reno7 Pro 5G didn't play those at a high refresh rate either.

Enough about the screen. Moving to the other side of the Oppo F21 Pro, we have an island housing flash and three cameras - 64MP primary, 2MP depth, and 2MP microscope. The last one lets you take photos or videos with 15x or 30x magnification and has Orbit Light around it to evenly light up the area. 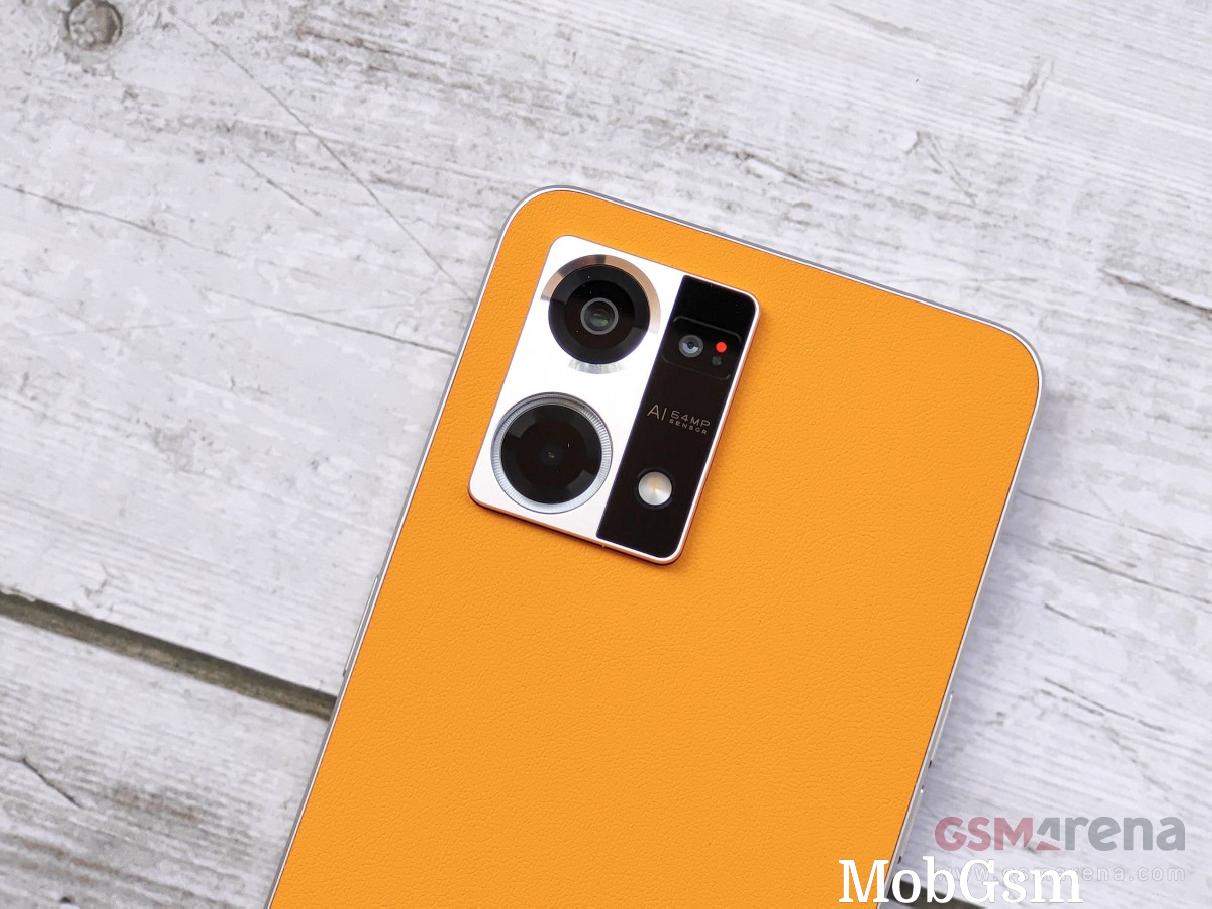 But that's not the only purpose the Orbit Light serves. It glows up for incoming calls and app notifications and when the F21 Pro is charging. It also blinks when you launch a game, but we are not sure why anyone would want that. You can adjust the Orbit Light's functionalities by navigating to the F21 Pro's Settings > Personalisations > Breathing light menu. 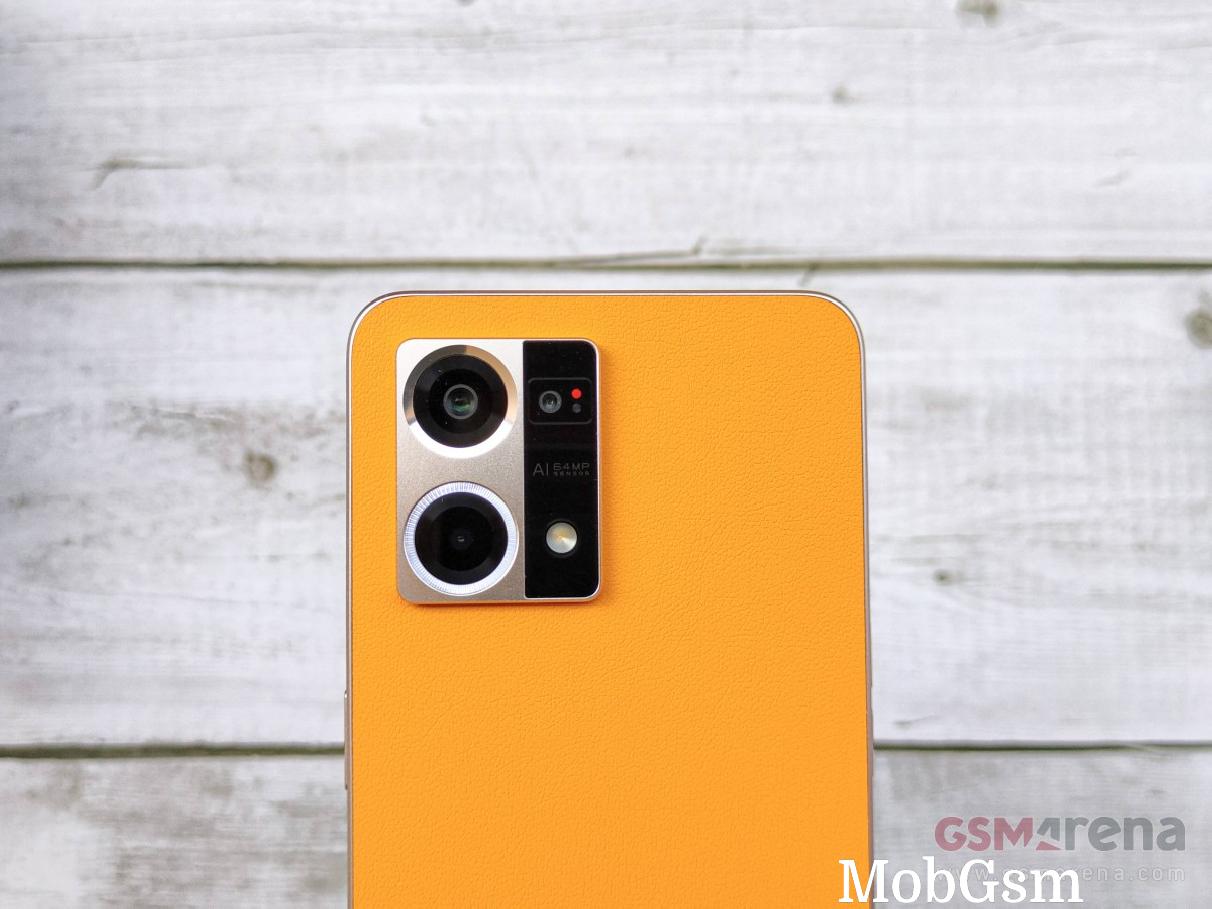 Orbit Light around the microscope camera is turned on

The Oppo F21 Pro's rear panel on the Cosmic Black version is made with the Oppo Glow technology, whereas the Sunset Orange model flaunts a Fibreless-Leather design.

Oppo tells us it used lychee-grain leather for the base material because it is water-resistant and wear-resistant. And this design not only makes the F21 Pro Sunset Orange look premium but also offers a great in-hand feel, adding to the overall experience. Not to forget it eliminates the need to use a protective case to avoid scratches and fingerprint smudges. 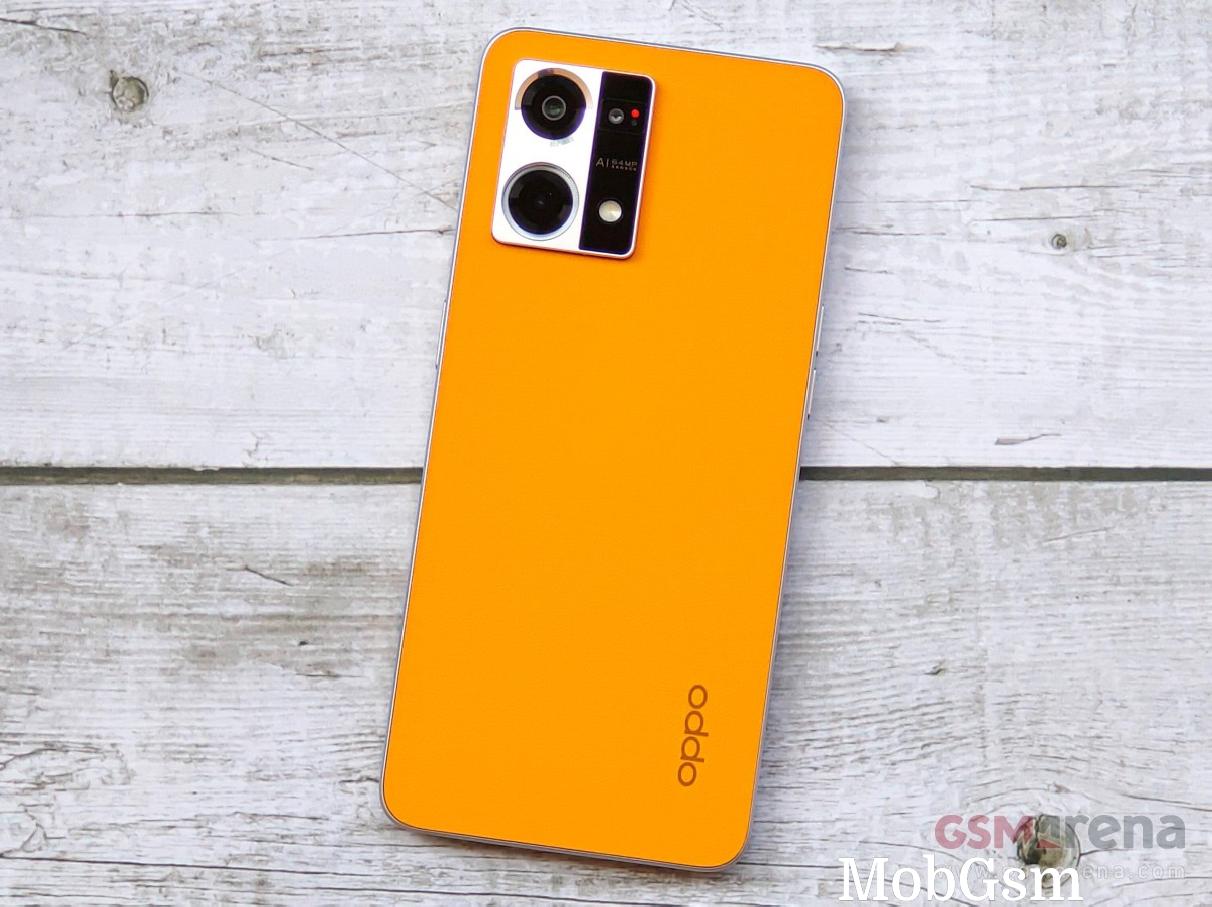 We like the overall design and build of the Oppo F21 Pro Sunset Orange version. It is slim and sturdy enough. And at 175 grams, it was comfortable for prolonged usage, but the flat frames, made of polycarbonate, aren't for everyone. The power button and volume keys offer decent feedback. 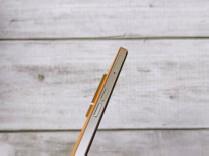 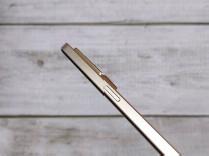 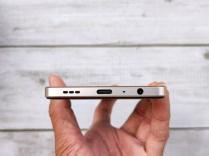 On the inside, the Oppo F21 Pro has the Snapdragon 680 SoC with 8GB RAM and 128GB storage. There aren't any other memory options available in India, but you can expand the storage up to 1TB via a microSD card and the RAM virtually up to 5GB, which, in our experience, hardly makes any difference in the real world.

The smartphone runs Android 12-based ColorOS 12.1 out of the box and March 2022 Android security patch. Oppo has promised two Android version updates and up to four years of security updates for the F21 Pro but didn't reveal the latter's frequency. 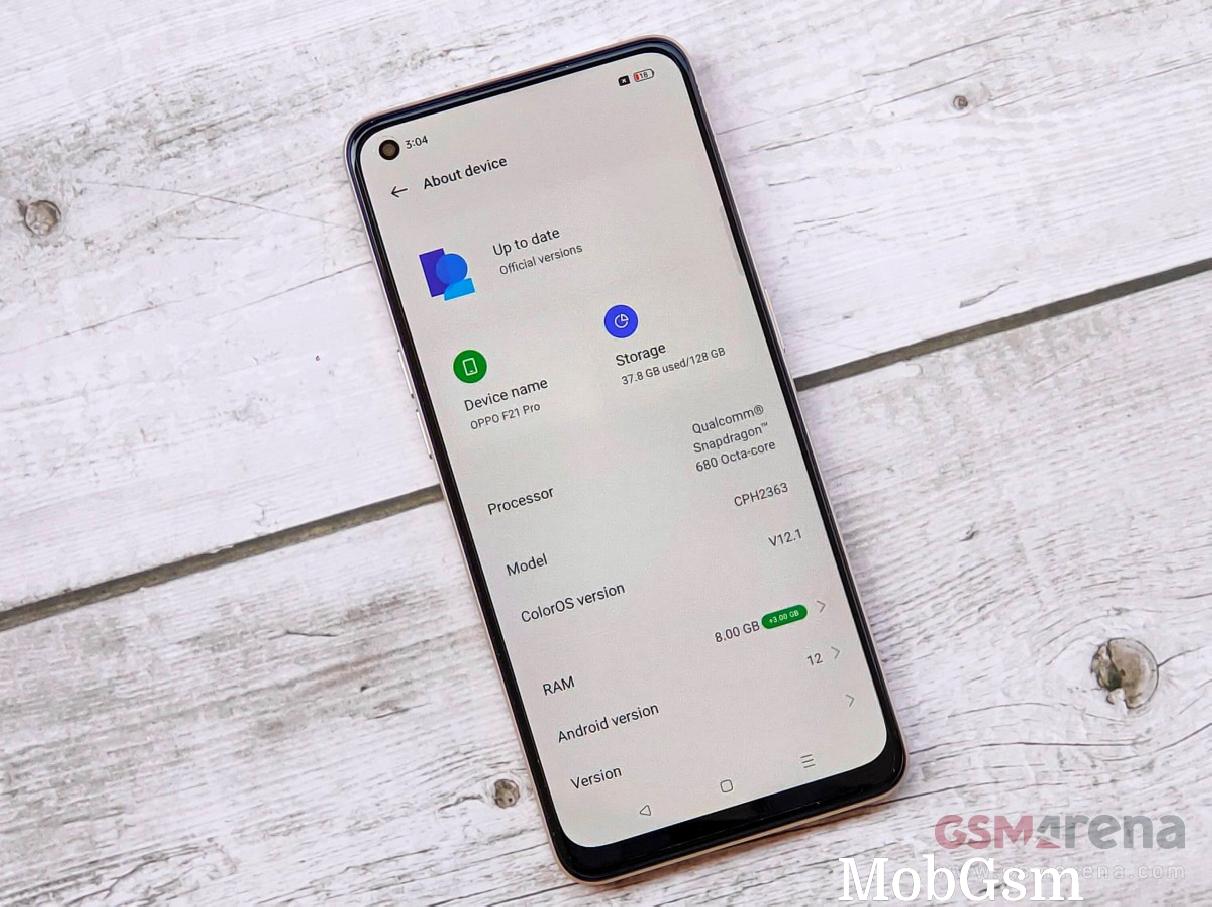 The software on the Oppo F21 Pro doesn't offer anything different from what many other ColorOS 12.1-running smartphones have. However, it's worth noting that the haptic feedback we get on more expensive Oppo smartphones running ColorOS 12, including the Reno7 Pro 5G, Find N, and Find X5 Pro when performing different actions such as changing volume levels is not present on the F21 Pro. That's no surprise since the F series is on the lower tier, and Oppo told us that this feature requires a special motor the F21 Pro doesn't have, so it isn't something that can be added with a future software update.

The Oppo F21 Pro's performance is nothing to write home about either. The phone worked fine when navigating the UI and browsing the web, but there were times it stuttered, and you shouldn't expect a stellar gaming experience at the highest settings on games such as COD and PUBG. We expected that since the F21 Pro is powered by the Snapdragon 680 chip, and we had a similar experience with the Realme 9i having the same Qualcomm silicon at the helm. 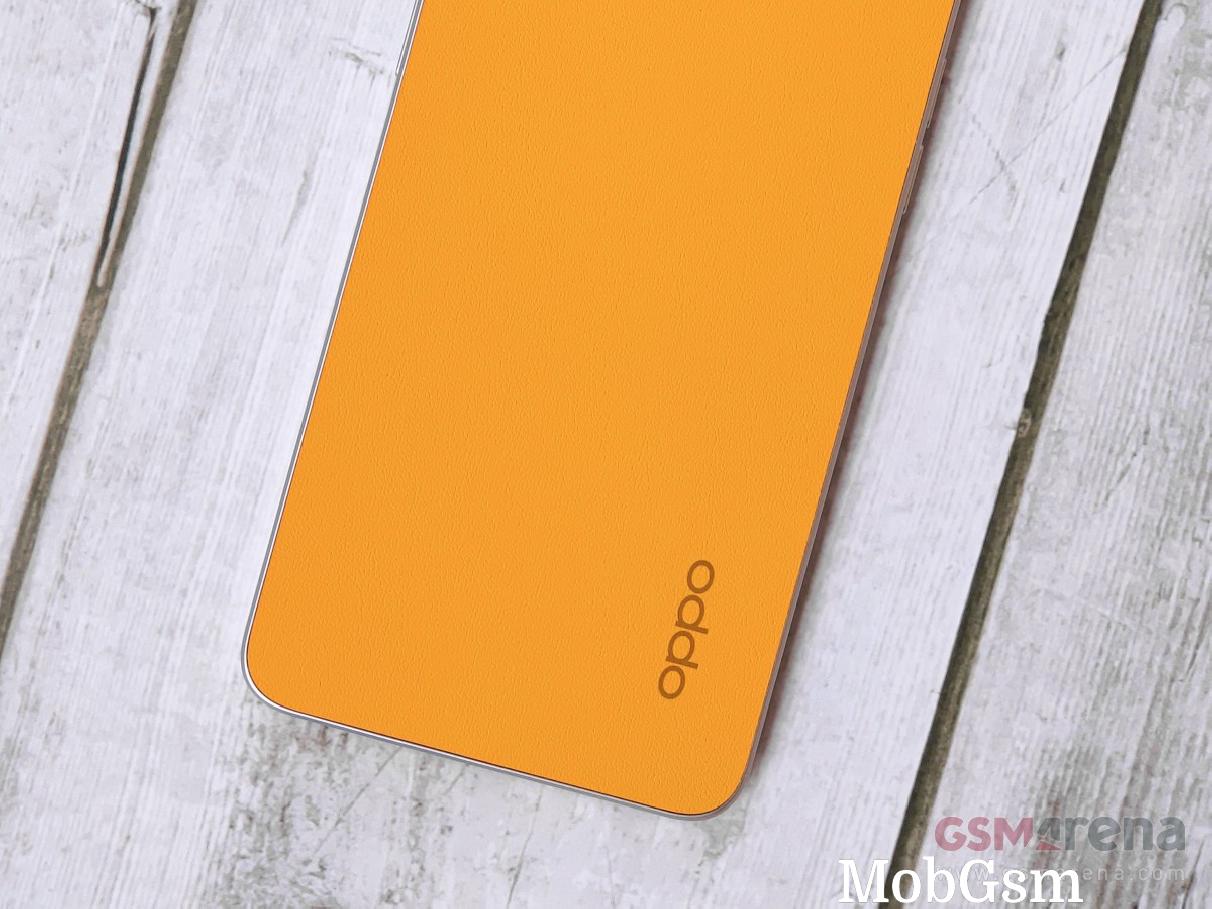 Fueling the entire package is a 4,500 mAh battery that draws power through the USB-C port at up to 33W. Oppo says the bundled 33W adapter can fill the cell from flat to 100% in 60 minutes, but in our testing, it took 1 hour and 20 minutes for a full charge. 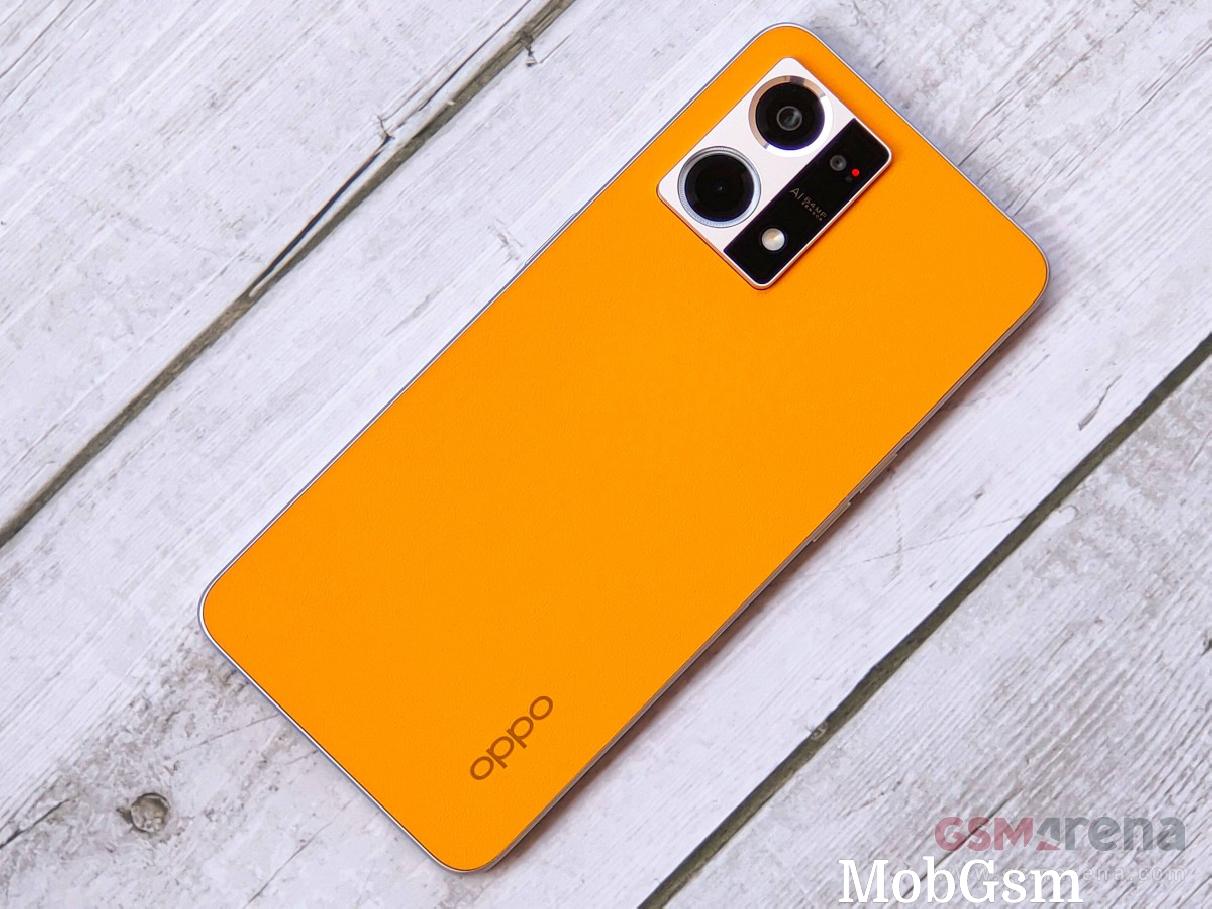 Oppo Reno8 series launching on May 23

Oppo details the rigorous testing of its smartphones

Oppo Reno7 5G in for review