The Weibo post mentions a “thin and light body” with “4500 mAh super battery”. There is also mention of 67W charging that’s capable of fully charging the Civi 2’s battery to full battery in 40 minutes. 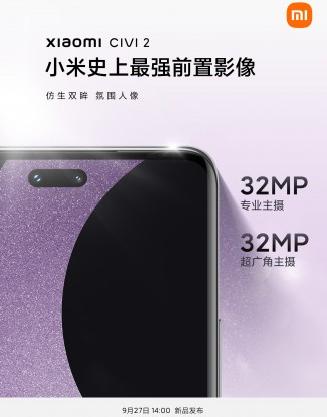 The Civi 2’s triple camera setup was detailed recently, though we only know about the main 50MP Sony IMX766 sensor with f/1.8 aperture. The dual selfie cameras are 32MP each, one of which has an ultrawide angle lens.

All else will be revealed at Xiaomi’s launch event for the device, taking place on September 27 at 14:00 Chinese local time.

Xiaomi Redmi Pad is headed to the Philippines

Xiaomi leads the Indian smartphone market, Oppo is the only brand still growing