Honor scheduled a launch for November 23, and later the company confirmed we"ll see the Magic Vs foldable make its debut. Today, the company CEO George Zhao posted on Weibo a video, revealing the Honor 80 series will also be introduced next Wednesday.

The phones will have a dual front-facing cameras, positioned centrally, paving the way for a Dynamic Island-type of notifications.

The design of the phone was revealed by Timmy Yip, a 58-year-old renowned artist from Hong Kong with works in costume design, and visual and contemporary art. Another celebrity influencer that promoted the devices on their page is the Chinese model and actor Simon Gong, who is part of the Honor family since the 50 series. 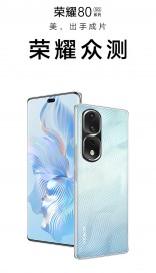 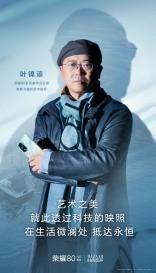 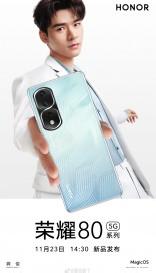 The camera design with two big circles really has been part of Honor since the brand became independent, but this looks like the neatest implementation yet, with the number 8 embedded in between. Aside from this one bunch of photo and video teasers, we don’t know much about the series.

Honor Earbuds 3i bring ANC for a low price of $70

Honor 80 series design and specs leak ahead of launch

Honor’s November 23 flagship is the foldable Magic Vs

Honor’s next flagship phone is launching on November 23