Honor is hosting an event in China on November 23 to unveil the Magic Vs foldable smartphone and the Honor 80 series, expected to consist of four models - vanilla, SE, Pro, and Pro+. The Honor 80 Pro+ is rumored to sport a 160MP camera on the back, and while we are yet to get any confirmation on that from Honor, the Chinese brand today announced that the Honor 80 Pro will feature a 160MP camera.

Honor made this revelation through a Weibo post, which also includes a poster showing the Honor 80 Pro with a center-aligned dual camera setup. There"s no official word from Honor about the Pro model"s front-facing cameras, but rumors have it that the Honor 80 Pro+ will also sport a dual camera setup, which will be a combination of two 50MP units. 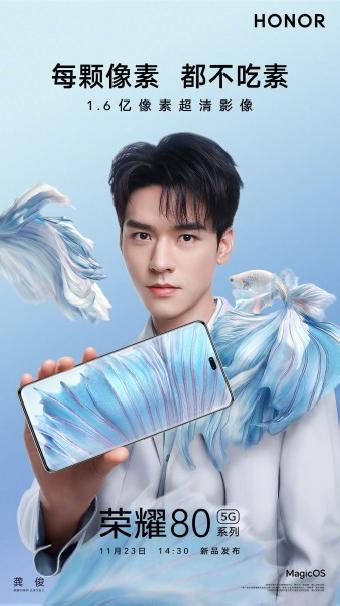 Circling back to the Honor 80 Pro, the machine translation of the Chinese language text at the bottom of the poster says the camera on the smartphone "supports up to 160MP, and the experience is 160MP. Enter the "high pixel" mode to experience." One might argue that it could also mean Honor is using a lower-res sensor to take 160MP pictures with software tricks, but if that was the case, we don"t see any reason to make a big deal about it.

Honor is yet to explicitly confirm the existence of the Honor 80 Pro+, but since its Weibo post uses the word "series" to promote the 160MP camera in the lineup, it"s basically a confirmation that there will be more than one smartphone in the Honor 80 series featuring a 160MP camera.

You can expect to hear more about the Honor 80 series in the lead-up to the official unveiling on November 23.

Honor Earbuds 3i bring ANC for a low price of $70

Honor 80 series design and specs leak ahead of launch

Honor’s November 23 flagship is the foldable Magic Vs

Honor’s next flagship phone is launching on November 23