MediaTek unveiled the Kompanio 1300T chipset, its latest and greatest offering for tablets and ARM-powered laptops. It is similar in hardware to the Dimensity 1200 chipset and is an upgrade over the Kompanio 1200 (MT8195) that was announced in November last year.

The Kompanio 1300T is fabbed on TSMC’s 6nm node and features an octa-core processor with Cortex-A78 cores and A55 cores. The major upgrade is in the GPU department, which now features a nine-core Mali-G77 MC9 (the 1200 chip has a mid-range G57 MC5).

The 1300T comes with an integrated 5G modem that works in the sub-6 GHz bands and supports dual-SIM operation and 2 channel carrier aggregation. This will enable high-speed connectivity on the go.

Road warriors will also appreciate the support for two 1080p displays – again, this is a tablet and laptop chip, not something meant for phones. With a single display, the chipset supports up to 1440p resolution with 120Hz refresh rate (with dynamic refresh rate) and HDR10+ video playback.

There’s an APU that enables features like AI-PQ (“AI Picture Quality”) and voice commands. The chipset supports cameras with up to 108 MP sensors and can record 4K video at up to 60 fps. Staggered HDR is also an option at 4K resolution.

Besides 5G, which can provide a low-latency connection for gaming, the chip also supports Wi-Fi 6 and Bluetooth 5.2. 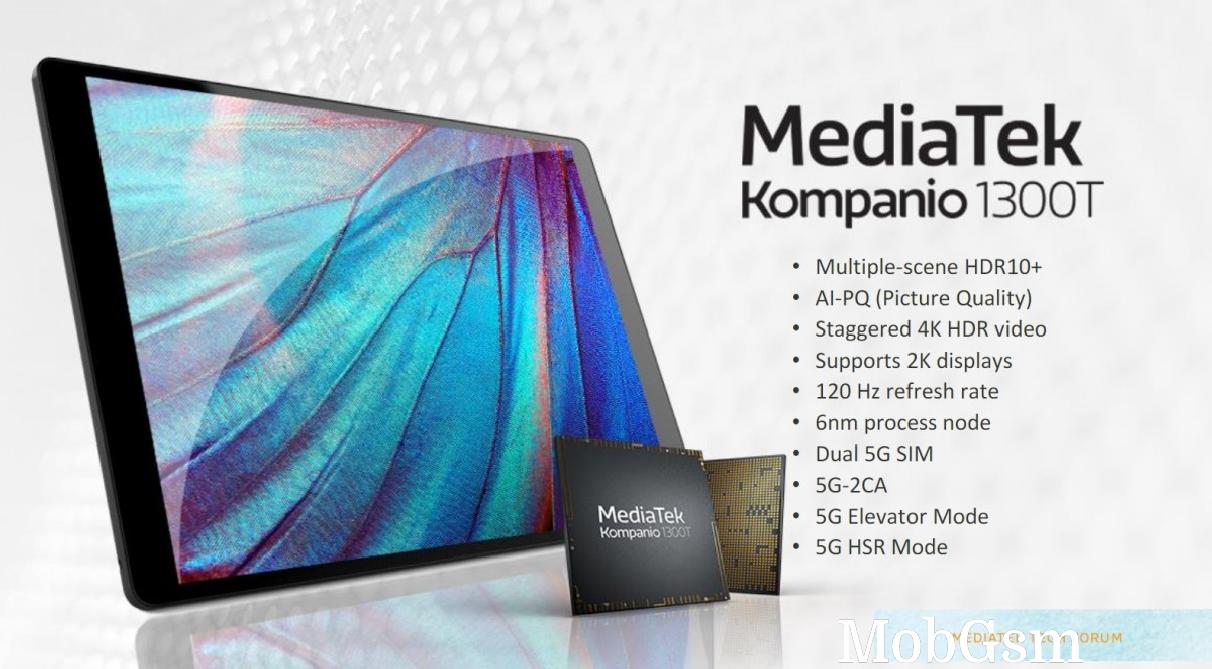 The first tablets with the Kompanio 1300T will be unveiled in the July-September quarter, so any moment now. The company didn’t confirm this, but a well-known leakster suggests that the Honor V7 Pro tablet (which may be unveiled in mid-August) will be powered by the 1300T.

MediaTek, quoting data by Counterpoint Research, also took the opportunity to celebrate remaining the biggest chipset vendor. Its market share grew to 37%, Qualcomm, Apple and Unisoc also grew compared to 2020, mostly at the expense of HiSilicon (and to a lesser extent Samsung).

There are 30+ smartphones powered by a Dimensity chipset. Here is an overview of the Dimensity line-up so far:

But MediaTek’s interest cover much more. Most smart TVs use a Wi-Fi modem made by MediaTek, most smart gadgets with voice assistant functionality do too. The company also supplies chips to carries building out their fiber-optic networks as well.

There’s also the MediaTek T750, a 5G chipset for CPE applications (Consumer-Premises Equipment, i.e. a router or similar device). It is fabbed on a 7 nm process, features a quad-core Cortex-A55 processor (at 2.0 GHz), a 5G modem (sub-6 GHz, good for up to 4.7 Gbps) gigabit Ethernet, Wi-Fi 6, a GPU for an external display (up to 720p) as well as hardware acceleration for router duties.

MediaTek announces Dimensity 1080 with bump in CPU and efficiency

Mediatek to launch Dimensity 8100 in March